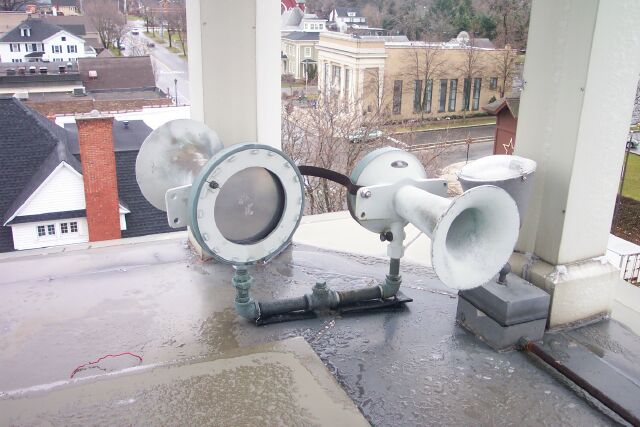 Since the 1880's Fairport has had some type of steam or air horn system. The first was a steam whistle located at the DeLand Chemical Company. Main Street and the Erie Canal were "intersected" and the village was divided into four districts. Southwest of this "intersection" was district one, southeast was district two, northwest was district three, and northeast part of the village was district four. The whistle was sounded with one long blast followed by a short blast(s) of the appropriate district. For example: If a fire occurred on High Street, the whistle sounded one long blast followed by four short blasts. Ironically, the fire whistle was destroyed by fire in 1893. In 1917 a "Three Bell Whistle" was installed and used until early 1921.
In March 1921, a compressed air horn was installed on the clock tower on top of the village hall. This horn was a Gamewell Type B Diaphone Horn. This horn was tied into two street boxes. One located in front of the village hall, and the other on Parce Avenue. As the village grew more street boxes were added to the system. Twenty-seven in all. Each box had a number. When the hook on the box was pulled, the horn would blast out the box number. For Example, the old West Avenue School was box 36. The horn would blow three times, pause, then blow six times. That number would repeat for three rounds. A blast of 2-2-2 meant the fire was "out of town". In 1976, Monroe County started dispatching fire calls for the towns in Monroe County. A radio receiver was hooked up to the horn and the 2-2-2 code meant the county fire dispatcher alerted the call. Because of it's age and the availability of replacement parts (or lack there of), the diaphone horn was replaced in the early 1980's with two diaphragm air horns. One points north, the other South. They are still located on top of the clock tower, and still sound the 2-2-2 code. The horn up until the late 1990's used to blow one blast at 7:00 A.M. 12:00 Noon, and 9:00 P.M. That's it in a nutshell. Stay tuned for a more in depth look into the evolution of pagers and dispatching.